Texas ranks as the 10th most dangerous state for walking commuters, with nearly 4,200 pedestrian deaths between 2003 and 2012. The total number of traffic fatalities has decreased, yet pedestrian accidents are on the increase. In 2012, 15 percent of all traffic fatalities involved a person on foot.

Experts say that southern states are more likely to be dangerous places to walk because of their rapid post-war development, when new roads were built wider to accommodate more cars at higher speeds. The statistics seem to agree.

The overwhelming number of injuries involving pedestrians are a result of inattentive drivers (distracted drivers) who are either not watching the roads closely, or who misjudged people in the process of crossing the street.

Turning vehicles tops the list of driver actions that lead to pedestrian accidents and deaths. At intersections with signals, vehicles that are turning account for another large portion of accidents. More accidents occurred with vehicles turning left than those turning right.

Clearly, intersections are the number one hazard for pedestrians walking in congested areas. The use of cell phones and electronic devices largely contributes to these accidents, and these devices should never be used by a driver travelling through such an area. Unfortunately, though, drivers continue to drive distracted. You must protect yourself.

How to Be a Safe Pedestrian

Be sure to teach your children these safety tips as well, as they account for 40% of pedestrian accidents.

What are some additional safety tips that you use when walking along the roadways? Please share. 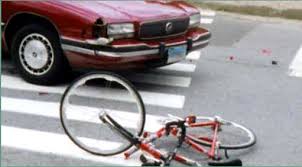 Distracted driving has become a public threat and is pervasive in our society, making it that much more difficult to deal with. If you stand at the road side and watch drivers, you will most likely see many who are texting, talking, using a GPS, or fidgeting with a cellular device in some way.

According to the U.S. National Highway Traffic Safety Administration (NHTSA), there are three main types of distraction while driving:

Although the number of motor vehicle deaths has declined in the United States, distracted driving deaths, including pedestrians killed by distracted drivers, continue to rise. Pedestrians who are sharing the roadways by cycling, walking, or other activities, are going to have to be more aware of this threat.

Today, if most of us see a driver who does not have a young child restrained properly in a car seat, we are likely to be upset with the driver. Many of us will say something to the driver, demonstrating our anger and lack of acceptance for placing a child’s life in danger. However, when we see someone using a cellular device while driving, it is somehow more acceptable. This has to change, as we realize more and more the threat we are placing on the lives of others by being so distracted while driving.

Cases of distracted driving are likely under reported as well because it is so difficult for police to prove. This makes distracted driving much more difficult to enforce than other laws, like child restraint laws. The evidence on policies intended to curb distracted driving is mixed, and some are just not working. Policy makers suggest that if this is the case, we need to think about marking crosswalks and bike paths more clearly, and separate cyclists more from the dangers of traffic.

Those who enjoy cycling, walking, or running near busy streets need to be fully aware of their surroundings, and know that distracted drivers are all around, placing them in danger.

If you or a loved one have been injured in a pedestrian accident involving a distracted driver, you should call an attorney who can assist you with a claim against the driver. Call Kay Van Wey of Van Wey Law in Dallas, Texas at (214) 329-1350, to get the facts sorted out.

I am a Dallas personal injury lawyer who fights battles on behalf of individuals and families who have become the unwitting victims of a senseless medical mistake, a dangerous drug or medical device, a fatigued or distracted driver. I will continue to advocate on behalf of each individual who I am privileged to represent in their time of need. But, I also will be advoKAYting on behalf of you.